The stories feathers tell us

The feather I’m holding in my hand once belonged to a Wild Turkey (Meleagris gallopavo). I found it on the short-cut grass near the old south hayfield here at my farm late last summer. I keep it and two others I’ve found over the years standing upright in an old coffee mug here in my office. I like to look at the colors and patterns, each one similar but uniquely different in subtle ways. When I see them I think about the lives of the Wild Turkeys here at my place.

In the spring the toms strut across my old fields, gobbling as they go. They fan out their handsomely extravagant tails and spread their huge wings sideways in a sort of modified curtsey to impress the hens and attract a mate. It must work, because later every summer I see the hens with fresh groups of young poults cautiously following, learning how and where to find insects and seeds to eat. During the winter months I don’t see the Wild Turkeys as often, but I do find their large distinctive tracks in the snow covering the gravel driveway. While I’m bundled up in layers and layers of clothes in the bitter cold, the Wild Turkeys make do with just their feathers to keep them warm.

Sometimes when I’m out walking through the fields in the tall weeds I’ll accidentally flush a group of Wild Turkeys that I did not know were nearby. In a noisy commotion they bolt up into the air to fly toward the fenceline, slowly going higher at about a forty-five degree angle, just barely clearing the tops of the trees and disappearing out of sight. It isn’t easy for the hens, who weigh about nine pounds, and the toms, who often weigh fifteen or sixteen pounds, to get airborne, but they manage to do it quickly enough.

When I first began looking at birds carefully I was focused only on the colors of the feathers, trying to memorize the patterns of the plumage of songbirds and ducks and hawks as clues to the bird’s identity. The brilliance of a mature male Yellow Warbler’s head and the streaks of chestnut on its yellow breast feathers is a combination that sets it apart from any other species.

I’ve never found a warbler feather on the ground, but I have come across Blue Jay feathers, Cedar Waxwing feathers, and Northern Mockingbird feathers. When a Cooper’s Hawk was hunting here I found a whole pile of Northern Cardinal feathers on a fallen log, the leftovers from the hawk’s meal. When I see these loose feathers I often take photographs, and I’ve picked them up to trace their outlines into my field notebook. But I cannot take them home with me. That’s illegal today, but that wasn’t always the case.

In the late 1800s a fashion craze to decorate women’s hats with bird feathers, nests, even whole birds, almost wiped out certain species. Plume hunters gathering feathers and bird parts for money killed nestlings and adult birds, leaving a swath of destruction. Three years after Frank Chapman counted the number of dead birds he saw on women’s hats in New York City, young college student and birdwatcher Frances Miriam Bailey pointed out the devastation to her classmates at Smith College in 1889. Then she wrote an essay about the need to stop using wild bird feathers for fashion that was published in the recently formed Audubon Society’s magazine.

It took years of work by increasing numbers of concerned citizens and dedicated naturalists (Frances was both) pointing out the devastation to bird populations before the plume trade was finally halted in the United States. The first step was the passage of the Lacey Act in 1900, then the passage of the Federal Migratory Bird Treaty Act of 1918. The fines for breaking these laws run into the thousands of dollars, and there are special added protections for Bald Eagles and Golden Eagles.

However, it’s perfectly legal for me to keep the Wild Turkey feathers I find because they are from an exempt game species. I often take one with me when I’m giving a birding talk and use it to tell the story of bird conservation.

But feathers are more than a history lesson. They also give us an insight into what it is like to be a bird. When we watch birds flying or perched we see only the outermost layer of feathers, the contour feathers that cover the wings, the tail and the rest of the body. These feathers are arranged to slightly overlap each other to provide a smooth exterior, so necessary for flight and to shed water. This is what we see in the illustrations in field guides.

Birds have five other kinds of feathers, each with a different shape and function. The soft, fluffy down feathers right next to a bird’s skin help regulate the bird’s body temperature. In wild birds, it’s easiest to see the down feathers when the youngsters are still nestlings, or a brancher, like this young Barred Owl whose fuzzy, fluffy, shaggy down feathers will soon be covered by contour feathers. 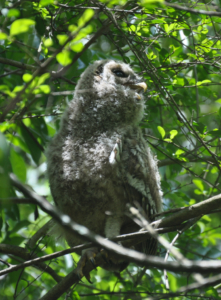 The three other kinds of feathers have their own special functions. Bristle feathers, which occur most often on a bird’s face, seem to help with capturing small insect prey, and deflecting dangerous objects from the eyes. Semiplumes can be anywhere on a bird’s body and serve to provide support for the contour feathers, and provide extra insulation. In some species, beautifully colored and fancifully shaped semiplumes are used to attract mates, and these easy-to-see feathers also appear in field guide illustrations. Exposing the methods of hunters collecting the enormous breeding plumes from egrets played a vital role in finally passing the laws that still protect birds today. Filoplumes are also mixed in with the contour feathers and the downy layer. They seem to function rather like whiskers, helping the bird sense the movement of air and whether its other feathers are out of alignment. 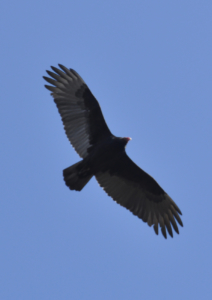 But what I like to study the most are flight feathers. In this from-the-ground-looking-up photo of a Turkey Vulture, the external arrangement of the flight feathers is easy to see. If we could look inside the bird’s skin we’d find something amazing. A network of ligaments connect and anchor a bird’s flight feathers to the bones in the wings. The two central tail feathers are anchored to the bird’s skeleton, too, connected by ligaments to the bird’s pygostyle, the unique end of a bird’s spine. These interior connections enable the bird to steer as it moves through the air. It’s a marvelous system.

The other thing I find fascinating is that although a bird has the same number of flight feathers on each wing, the feathers have different shapes depending on which wing they’re on. Here’s how it works: A flight feather has a central quill like a hollow straw. On each side of the quill are the flat vanes. But except for the two central tail feathers, the vanes are not equal in width. The narrower vane is toward the leading edge of the wing, and corresponds to the side of the body the feather came from. 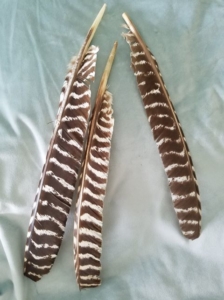 Studying the size of the vanes, we can see that these three feathers came from different sides of a bird. The  feather on the right in this group is the one I was holding in my hand, and came from the right wing of a Wild Turkey. The other two in the group photo came from the left sides of living, flying birds. Birds who walked through my fields and flew up to toward the trees and found mates and raised young. Isn’t that a cool story?

To help identify any feathers you find, this book has superb color illustrations and clear explanations of how feathers are arranged on a bird’s body. Bird Feathers: A Guide to North American Species, by S. David Scott and Casey McFarland.

You can also find help identifying feathers online at this website: https://www.fws.gov/lab/featheratlas/glossary.php

If you’d like to learn more about the science and history of feathers, as well as the story behind the laws that have been protecting birds for more than 100 years, this book is a fascinating look into all sorts of details, well-written and fun to read. Feathers: The Evolution of a Natural Miracle, by Thor Hanson.