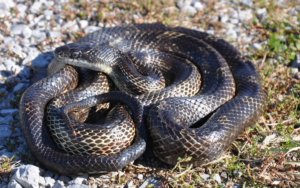 I don’t think about snakes very often. I don’t go looking for snakes on purpose. When I find one, it’s always a surprise.

My reactions are not because I’m afraid. I’m not at all frightened. My “oh!” is a soft sound, not a scream or a shriek, just an involuntary reaction, one part surprise, one part delight.

And I stand still because it’s the polite thing to do.

I’m an intruder into the snake’s life, and it’s probably just as surprised as I am. To be courteous, I want to give the snake ample time to assess what’s happening, go on about its business as usual, or adjust its behavior if it decides that’s necessary. Standing completely still also gives me time to consider what species it might be—and figure out if I can get a good photo!

The snake species I see most often—and by that I mean two or three times in a single year—is one of the largest found here in the Ohio River Valley, the Black Rat Snake (Elaphe obsoleta obsoleta). This species’ scientific name has three parts instead of the usual two because there are so many variations among rat snakes in eastern North America. While each of the five subspecies has distinctive coloration patterns, their geographic ranges sometimes overlap, and it’s quite useful to be able to separate them by name.

A mature Black Rat Snake will be anywhere from four to six feet long and about as thick as my wrist. They’re very muscular and strong, and can climb quite agilely over many different surfaces.

In April, when the average overnight air temperature begins to warm up into the mid-fifties Fahrenheit, the soil at ground level warms up, too. That’s when the snakes who’ve spent the winter hibernating below the frost line begin to emerge and resume their warm weather lives.

The first thing to do is find something to eat. Two favorite hunting spots here at my place in Kentucky are in my old tobacco barn among the scrap lumber and bits and pieces of farm equipment, and near my house amid the mulch and shrubs in the gardens. There aren’t any rats in this part of the county, so these snakes are mostly looking for mice or voles, perhaps an unwary chipmunk.

But rat snakes also hunt for birds’ eggs, nestlings, and fledglings. And that’s as it should be. I hold no grudge against them for doing so. 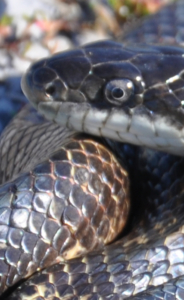 A hungry snake prowling around is on the lookout for mistakes. Perhaps an inexperienced bird built its nest in an inappropriate place, either too close to the ground or not far enough out on a slender limb, giving a snake easy access to the treasure within. Maybe the parent birds are not guarding the nest carefully enough. Maybe a nestling fell from the nest before it could fly. Perhaps a fledgling is already weak from parasites or disease and cannot fly well. In each case, the predatory snake who makes a meal of what it finds is acting as a pruning mechanism, and ultimately contributing to maintaining a strong overall bird population. What snakes do is part of a vast natural system, elegant in its interconnections—and I will not interfere.

The other snake I sometimes encounter here is at the other end of the food chain.

In the warming June sunshine this Monday morning I was walking the mowed path between the pond and the western woodlot, hoping to spot a few newly emerged dragonflies. It’s been rather windy lately, and I was also picking up blown down twigs and limbs to keep the path clear. So my eyes were on the clovers and grasses—and there, right amid all that fresh green was something yellow and brown. Ah! An Eastern Garter Snake (Thamnophis sirtalis sirtalis). 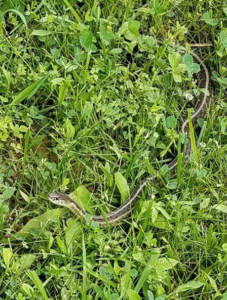 I already had my cell phone in my left hand, ready to photograph insects. Slowly I raised it to snap a photo of the snake as we sized each other up. This is a slender snake, only about as thick as my thumb, quite handsome, and intelligent in its own way. It can catch earthworms and frogs to eat. It’s quite skillful.

But I don’t believe that snakes can differentiate humans from any other large creature. Their eyesight isn’t that keen. What they can do is react to movement and vibrations. That could simply be the footsteps of an approaching Virginia White-tailed Deer, or what is far more dangerous, a hawk hurtling down feet first to snatch up a meal of juicy, nutritious snake.

But there’s danger to snakes from stealth hunters like herons, too, who will stand perfectly still and motionless, waiting patiently for a snake to get within range of their long stabbing bills. In a split second, this snake on the path decided to retreat, gliding back into the unmowed section of the old hayfield to hide in safety among the tall grasses and shaggy weeds. I did not pursue it. There was no need for me to chase it for a better photo, or for any other reason.

As I walked on picking up sticks I thought about proper snake etiquette.

Here are my recommendations for good manners toward snakes:

• When you see a snake, stop and admire it from a distance.
• If you think you might be too close, step backward slowly.
• Do not chase, poke, or otherwise attempt to make physical contact.
• Take only photos, and do not interfere with the snake’s behavior.
• Give the snake room and time to leave the scene first.

A few words about venomous snakes:

There are few venomous snakes in the Ohio River Valley, only 4 species among the 32 kinds of snakes found in Kentucky. In Indiana, it’s 4 among 33, and in Ohio, 3 among 25, with similar ratios in other nearby states. In each state these relatively rare venomous snakes prefer very specific and well-known habitats, and are usually protected by strict laws. If you’re going to be in these areas, wear leather boots that extend above your ankles. Keep careful watch along the sides and far ahead on all paths. Give all snakes the right-of-way.

To learn more about the complex and fascinating lives of snakes, and how to identify the ones in your area, go directly to your state wildlife department’s website. You’ll find accurate information for Kentucky at https://fw.ky.gov/Wildlife/Documents/kysnakebook.pdf,
for Indiana at
https://www.in.gov/dnr/fishwild/9385.htm, and at similar sites in other states.