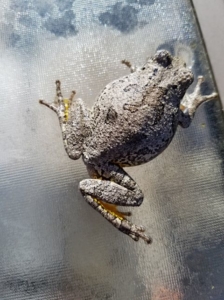 The frog sunning himself on my deck table this spring morning is not the swashbuckling hero of the rollicking folk song “Froggie went a-courting.” He has no sword by his side, and no pistol. But he does have something quite special to impress the ladies—his voice.

He doesn’t have any amorous designs on Miss Mousie or any other rodent. What he wants is a lady frog, one of his very own species, a willing and receptive Cope’s Gray Tree Frog (Hyla chrysoscelis).

But before he can go a-courting, he needs to warm up.

This past winter was not a particularly snowy one—but it sure got cold. Here in eastern Jefferson County, Kentucky, winter weather can swing back and forth between extremes, sunny and mild one afternoon, then bitterly cold the next night. Just before dawn one morning in February the temperature dropped to minus one on the Fahrenheit scale. That’s thirty-three degrees below the freezing point of water. 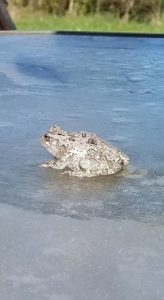 Ice presents a special challenge to frogs. They spend much of their lives in and around water, and must have access to standing water for their eggs and tadpoles to develop. In the parts of North America where winter weather is harsh and icy, most frog species simply avoid the problem by burrowing deep into mud and leaf litter in autumn, hidden safely away from deadly ice crystals at the water’s surface. That’s what the Bullfrog (Rana catesbeiana) and the Green Frog (Rana clamitans) do down at my farm pond. In autumn they seek places below the frost line where the surrounding mud will be cold, sure, but, not cold enough for ice to form.

Tree frogs have a slightly different strategy. Although they will snuggle down deep in leaf litter, they don’t typically burrow into mud. Instead they tend to wriggle into underground crevices, perhaps in an old groundhog burrow, or work their way deep into jumbles of rocks.

Such hidden places aren’t a guarantee of warmth, but tree frogs can survive in freezing temperatures because they have an unusual ability. Their blood contains a natural antifreeze chemical called glycerol. It’s so effective that tree frogs can survive not just a single deep freeze, even as low as minus 20 degrees Fahrenheit, but also repeated episodes of freezing and thawing weather throughout the winter.

In late March or early April, when the nighttime temperatures stabilize at about fifty degrees, the tree frogs begin to come out from their winter hiding spots to seek sunshine in the daytime and search for insects to eat during the night. 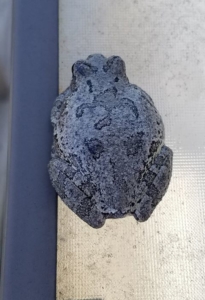 My glass-topped table might seem like an odd choice for sunbathing, but to a frog it looks a lot like a limestone outcropping, something that’s common around here. Cope’s Gray Tree Frogs can make their skin change colors to more closely match their surroundings. Here on the table, and as he would be on a rock, he is indeed mostly gray, but on a mossy and lichen covered log he could be more green than gray.

He sits quite still with his legs drawn up close to his body in sort of a squatting position that makes him look like a big blob of bird droppings, or a pebble. Nice disguise, either way. What doesn’t usually show is the pretty yellowish-orange wash of color on the skin of his inner thighs and groin. Nobody quite knows the purpose of this hidden accent. 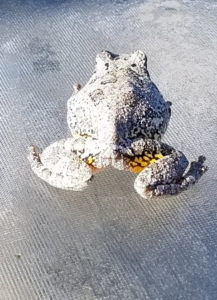 Throughout the day he moves ever so slowly, making minor adjustments to his position so that the sunlight falls on different parts of his body. Then he goes back to the squatting position.

Soon he will be warm through and through, refreshed and ready to go a-courting. He’s been quiet all day, but within a week or so he’ll begin to entice potential mates with his singing. His song is rather like the short buzzy trill of an old-fashioned doorbell. Not exactly musical to my human ears, but delightfully enticing to a lady Cope’s Gray Tree Frog.

Ah, froggie’s going a-courting soon, and romance will be alive in the night air!

To listen to a Cope’s Gray Tree Frog singing, visit this webpage: https://fw.ky.gov/Wildlife/Pages/Cope%27s-Gray-Treefrog.aspx

Each frog and toad species has a unique song—and they’re easier to learn than bird songs because there are fewer of them. Instead of hundreds of bird songs, in Kentucky there are only twenty common species of frogs and toads.

For an overview of all the frogs and toads of Kentucky, with links to individual species and their songs, visit this website: https://fw.ky.gov/Wildlife/Pages/Frogs-and-Toads-of-Kentucky.aspx

Got frog fever? Then you’ll enjoy the spectacular photographs in a delightful book which includes a CD with frog calls. Search at your local library or favorite bookstore for The Frogs and Toads of North America, by Lang Elliott, Carl Gerhardt, and Carlos Davidson.