Molting one’s feathers must be a lot like breaking in a new pair of hiking boots. At first, things are stiff, maybe a little clumsy. Nothing feels quite right. Maybe something is rubbing the wrong way. Adjustments must be made, and then made again.

This Northern Mockingbird is molting right now, and making a lot of adjustments throughout the day. Although males and females of this species look alike to our human eyes, something about this individual makes me think of a girl. So I’ll use she to describe what I’ve been observing her do this week.

Instead of seeking a private, secluded spot for personal grooming, she chooses a perch at the tiptop of a shrubby tree where there will be room to move without knocking into leaves or branches. She often begins by floofing out her feathers so there’s plenty of space between them. Then she starts digging and probing with her bill, poking around among her feathers with carefully aimed jabs and thrusts. 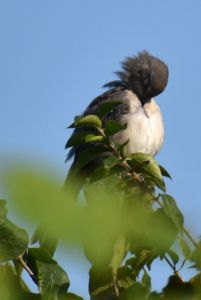 Underneath the outermost layer of contour feathers that help us identify a bird, there are other kinds of feathers that help birds identify personal problems and areas that need attention. The nerves connected to these feathers are exquisitely sensitive. They tell a bird if dirt needs to be removed, or if an insect pest is present. They also tell a bird when feathers are out of alignment and need to be smoothed back into their proper place for good flight. She spends a lot of time nibbling daintily among all her feathers cleaning them and arranging them precisely where they belong in relation to each other.

During molt a lot of extra activity is going on at and just above a bird’s skin level. When I first began studying birds I thought the word molt meant that old feathers fell out and new ones grew in their place. But that’s not quite right. Molt simply describes the process of growing new feathers. For youngsters growing their first set of flight feathers, there aren’t any old ones to shed, but this period of feather growth is still technically called a molt. For older birds, worn feathers do drop out before the new ones emerge.

Feathers are made of the same substance as our fingernails, keratin. Our fingernails grow continuously all year long, and we don’t feel a thing while it’s happening. But new bird feathers grow in a burst of activity, typically accomplished over a period of just a few weeks of concentrated growth. Each bird species follows a different timetable for molt. Most species molt once a year, often at the transition between one season and another. Many also molt again at a later time to add special feathers and colors when breeding season gets underway.

Bird skin contains feather follicles, similar to our hair follicles. During a molting period, the first stage of a new feather is called a “pimple feather,” a small knot at the feather follicle that contains the structures of the finished feather all encased in a sheath. As this sheath erupts from the follicle, it will split apart to allow the developing feather to emerge.

Over time, the new feather pushes upward, grows outward, and takes its final shape. As it grows a blood vessel nourishes it. However, once it’s achieved its final form the blood stops flowing, and the feather is dead, incapable of further growth. But the new feather’s base remains firmly attached to the follicle. The sensations of all this activity in and just above a bird’s skin must be exceptionally distracting. I think it’s the part that is so itchy. 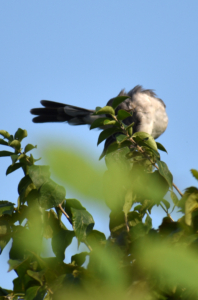 Keeping feathers in peak condition, whether they’re emerging, brand new, or many months old, requires daily grooming. An important part of the process for songbirds like this Northern Mockingbird involves getting a bit of oil from the preen gland at the base of the tail. The bird rubs its bill along the gland to get some oil, then spreads it around on individual feathers. The oil helps keep feathers supple. It’s also rather waxy so it helps rain or snow to slide off the feathers. Spreading the oil around just so requires all sorts of twisting contortions. I have a lot of photos of apparently headless birds in the middle of a preening session!

During molting season I’m always on the alert for evidence of feather loss and feather growth. The easiest and most obvious sign of feather loss is a gap in the wing feathers of a bird flying overhead. Usually the gaps from shed feathers will be in the same places on each wing, such as third out from the body on the left wing and third out on the right wing. This symmetrical pattern of feather loss is important for a bird to maintain equal weight on both sides and still be able to achieve controlled flight.

Observing feather growth takes a bit more effort. Northern Mockingbirds are quite comfortable around humans, and this one often lets me approach her within ten feet or so. When observing or photographing birds most of us focus on the eye and head—but sometimes it’s worthwhile to look at the other end!

In this photo it’s easy to see the different lengths of the pairs of new feathers that are growing longer each day. I’ve been watching this Northern Mockingbird a lot lately and when she flies she looks a bit odd. But with more floofing, scratching, twisting, and preening, soon her tail will achieve the familiar shape with gleaming white feathers on the outside edges—and in her new plumage she’ll be ready for the next season’s challenges.

A word of caution:

If you are lucky enough during molting season to find a shed feather, admire it, take photos, make a sketch, whatever you like in the field—but don’t take it home with you. Leave it where you found it. The possession of non-game bird feathers is illegal for the general public. A special federal permit is required to keep feathers, and generally available only to professional researchers and educational organizations. To find out why this is so, you’ll want to read my earlier blog about feathers.   http://nancygrant.us/nature/the-stories-feathers-tell-us/

If you want to take a deep dive into all aspects of molt, including feather structure and growth, among a lot of different species The Peterson Reference Guide Series includes a beautifully illustrated book, Molt in North American Birds by Steve N. G. Howell. 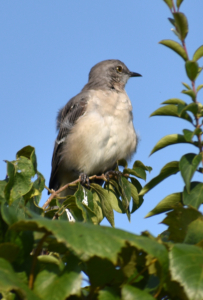