Flap-flap—wait, what’s that down by the edge of the highway? Circle in a little closer. Flap-flap-flap-flap—glide and tilt this way and that way to take a closer look.

That’s something new down there. That cinnamon brown lump by the side of the road wasn’t there yesterday. Looks like a Virginia White-tailed Deer.

More large birds come streaming in, honing in on the splayed-out form laying amid the weeds and dried grasses a few feet from the pavement. Last night a speeding vehicle crashed into a doe crossing the road, and there she is. Three of the boldest birds land near the carcass and hop somewhat clumsily toward it. Cars and trucks whoosh by, barreling along at top speed.

Approaching from the grassy side, the birds walk closer, determined to investigate. One leans over and takes a jab at the doe’s ears. Yes, quite dead. Perfect!

Nature’s clean up crew has arrived for work this morning. These Black Vultures (Coragyps atratus) have spotted this opportunity for an all-day feast with their keen eyesight. The other vultures in the neighborhood—which is farmland rapidly being transformed into subdivisions—constantly watch each other to see who knows where food is available.

Within minutes more birds are streaming in from other directions, drawn to this spot by following the first discoverers. Soon more than forty individuals are on the ground, ready to tear out the tastiest bits of nourishment from the fresh roadkill. They sidle and strut toward the potential meal, forming a line of hopeful diners. 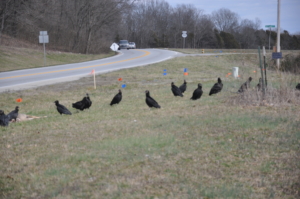 Later they might be joined by some of the area’s Turkey Vultures (Cathartes aura). Of a similar size, Turkey Vultures differ in important ways from their cousins the Black Vultures. Both species, often called buzzards by country folk, belong to a special group of birds called New World Vultures, in the Family Cathartidae. The family name is a based on a Greek word that means purifying or cleansing. And that is what vultures do, clean up messes.

Turkey Vultures (known to birders as TVs) have longer wings, longer tails than Black Vultures, and more important, a keen sense of smell which they rely on to locate decaying food hidden in brush or under leaves. But this roadkill is right out in the open, easily visible, and that’s how the Black Vultures found it. There’s an ongoing spying match among these two kinds of vultures, each always on the lookout for the other’s finds. So far this morning the bounty belongs entirely to the Black Vultures.

To human eyes, all Black Vultures look alike. Black body feathers, white wingtips, and only dark gray bumpy skin on the head and neck give them a somber look. This lack of feathers is a useful adaptation to their feeding methods. Unlike other raptors which tear apart their prey from the outside or simply swallow it whole, vultures deal with food sources that are often twenty times their own body size. They have to be able to work their way into the interior of these larger animals to get to the most nutritious pieces. Sticky bits of animal parts would quickly soil head feathers, so bare skin is easier to keep clean.

Although we humans can’t tell the males from the females, or which birds are older, the Black Vultures have some method of recognizing who is who. And there are definitely dominant birds in any assemblage, birds that are stronger, more powerful, and just plain bossy, perhaps because they are the elders. 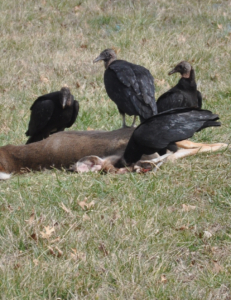 Vultures do not have the usual physical voice structures of other kinds of birds, and cannot call or sing. But at a fresh roadkill site they do make noises. Black Vultures hiss and grunt at each other, and often flap their wings and charge at other birds to show dominance. Some birds get first choice at a carcass, while others must wait their turn.

After a few hours, when everyone’s had a turn at the bounty by the roadside, the birds fly up to perch in the tall bare trees about one hundred feet away to digest their meal. Although this carcass is quite fresh, it will soon begin to spoil and become inedible to most creatures as bacteria break down the deer’s tissues. But vultures have special enzymes and bacteria in their digestive system that keep the birds from being poisoned by their often rotting meals. Throughout the afternoon the birds will return to the carcass to tear out more food, go up to a perch, digest, and repeat until near sunset.

These Black Vultures are the first responders to this fatal accident. After dark, the local coyotes may come to scavenge, and it won’t be long before various insects that specialize in carrion arrive, everything from flies to beetles. Within a week or so only bits of fur and bones will remain, and the local mice may find uses for those leftovers. The accidental death of one creature nourishes countless other lives. 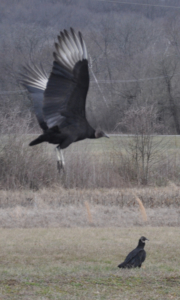 I am well aware that Black Vultures are causing damage to parked vehicles in certain areas of Florida and other states. The Indiana Department of Natural Resources has an excellent description of the problem and efforts to solve this unusual behavior. A one-page summary can be found at this website:

Respect the role that vultures normally play in nature.

The vultures I was observing and photographing posed absolutely no hazard to the traffic. They were not on the roadway or on the gravelly shoulder, and were not attempting to move into the path of the vehicles.

Yet I was shocked to note how many times passing motorists honked their horns to intentionally scare the birds. The hungry birds flew up from the carcass in wild panic at each blast of a horn. The noise disrupts the lives and work of these valuable birds. Such inconsiderate human behavior should be discouraged.

For more details about Black Vultures, including the chance to listen to the noises they make, visit this page at Cornell Labs’ All About Birds website: